At the March 16, 2009 Village Board meeting, Mayor Nicola Coddington presented the 2009 Adele Warnock Good Citizenship Award to Barbara Denyer.
Barbara has been a resident for almost 50 years and during that time her positive accomplishments for the Village of Irvington have been numerous.

Barbara was one of the people who created Irvington’s Centennial Celebration, collecting and displaying memorabilia. She was also one of the authors of Wolfert’s Roost, the history of Irvington, and has given tours of the Aqueduct. She worked on renovating the Town Hall Theater and got the Junior League interested in it. Barbara has been a great supporter of the theater and has been most gracious by giving and lending costumes when needed.

Barbara worked to “force” Mayor Bob Reisman into considering the acquisition of Burnham Building for the new Village Library and was the first person in town to donate funds for that purpose. She was also involved in the planning of the new Library.

She served on the Village Hall Selection Committee, which was responsible for the renovations of the Town Hall lobby and Court Room, and now a member of the Tiffany Room Committee; looking forward to the Reading Room, located in Village Hall, to be restored to the grandeur it deserves.

Most importantly, Barbara has always been a great supporter of all things she truly believes in that are for the Good of Irvington. 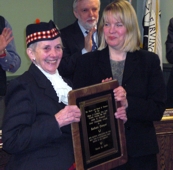